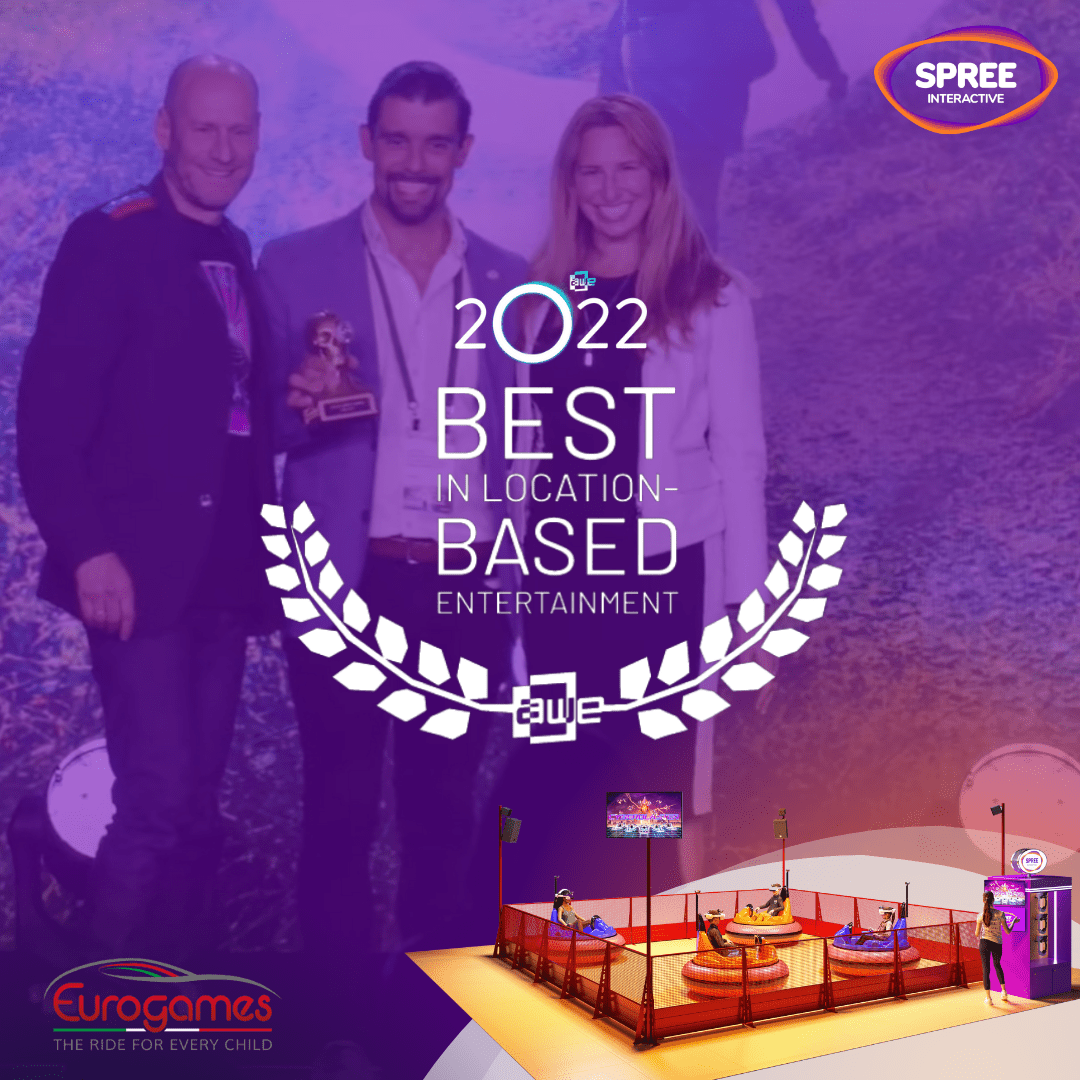 Santa Clara, CA, June 22 2022: Following on from a record 2021, SPREE Interactive, a pioneer and leader in delivering turn-key large-scale, multiplayer, free-roaming commercial VR attractions to the location-based entertainment industry, is pleased to announce another quarter of solid system sales across the globe. With a host of international confirmed orders during Qtr.1, the SPREE team achieved a revenue increase of over 300% compared to 2021.

The momentum gained during the 2021 IAAPA expo continued into Qtr. 1 with system demonstrations during the 2022 Amusement Expo in Vegas, the DEAL Expo in Dubai, and the SEA Expo in Saudi Arabia  – all playing a factor in the increased system sales. With high levels of sustainable growth, award-winning recognition and consistent orders from North America, the team now sets its sights on key growth areas across the Middle East and Europe.

Battery Powered VR Bumper Cars has won the prestigious Augmented World Expo Auggie Awards 2022 for the “Best in Location-Based Entertainment.” Now in its 13th year, the Auggie Awards have been one of the most recognized AR & VR industry awards in the world, having over 280 nominees. SPREE Interactive’s popularity in the public vote and recognition of Battery Powered VR Bumper Cars by the AWE committee, in a highly competitive group, is a testament to the universal popularity of the attraction. SPREE Interactive was competing against highly-funded projects such as Deloitte Digital and EXPO Dubai.

Conducting live demonstrations of the Battery Powered VR Bumper Cars during the DEAL Expo in Dubai proved highly successful with pre-orders taken for installations before the peak seasons. Battery Powered VR Bumper Cars, bundled with the interactive game Cyber Blaster, is now a proven solution for venues looking to enhance their guest experience with the trending exploration inside an immersive virtual world. Cyber Blaster was made in collaboration with award winning studio Pixomondo (a Hollywood studio known for special effects, e.g. for Game of Thrones).

At the latest expos, a number of new games debuted in the SPREE VR Arena, such as Picnic Panic and Granny’s Alien Invasion. Designed for ages 6 and above, the non-violent kid-friendly games resonated extremely well with Middle Eastern operators who tend to focus more on kiddie attractions. Key system features including the ability to let up to 10 guests play at the same time, increases throughput and in turn boosts the maximum amount of revenue an operator can achieve with the system.

With a robust funnel of leads and an extremely strong sales pipeline SPREE Interactive is set for massive expansion during the forthcoming year, aided by new offices in Texas, operating under a subsidiary LLC. SPREE is in the process of raising Series A funding to sustain the explosive growth of over 250% YoY for the third consecutive year in a row.